Suzuki Jimny with a roof-mounted tent

If it has an S on the front you can talk about it here.
Reply

You must hate your Kizashi interior too then? 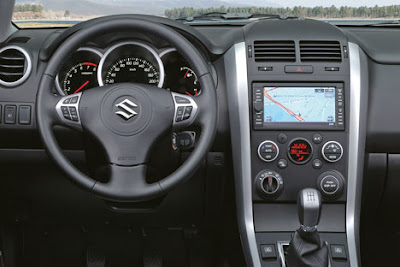 #32112  by KuroNekko
Tue Sep 23, 2014 3:55 am
Yeah, that's pretty dated. The center column especially looks very passe. While it was OK for the mid-2000's, it's hard to believe Suzuki still offered that in 2013. The Kizashi's interior is a lot better, IMO. The layout and the material quality is a lot better in the Kizashi vs. the Grand Vitara. That's not surprising given the GV's design dates to 2006 while the Kizashi debuted in 2009.

However, what's most convincing is to view the interiors of other 2013 small SUVs/CUVs. For comparison, look at the 2013 Kia Sportage's interior below. Even a 2013 Subaru Forester (Subarus are often lambasted for "dated-looking" interiors) looks more contemporary than a 2013 Grand Vitara's.

Suzuki was often criticized for not being competitive (or even trying) in the years before their exodus of the North American market. Things like offering the same styling for seven years is proof. Not only that, the powertrain was just as dated. Meanwhile, competitors like KIA invested in new designs and roared to popularity. It's really not rocket science why Suzuki dwindled in the last few years before it left North America. They made just about every wrong business decision they could possibly make.
2011 Suzuki Kizashi Sport GTS 6MT (Black)

The Kia looks ridiculously over complicated - buttons and bits and pieces everywhere. The HVAC control area is even tucked away under a significant ledge.

Luckily everyone has different taste.

#32122  by KuroNekko
Tue Sep 23, 2014 4:28 pm
True that we all have different tastes, however I really think the GV's interior is dated for a MY 2013 and most Americans agreed given that so few bought them as the GV stagnated without a redesign. I'd take any of those other car's interiors over that GV's. However, for the car itself, I'd like a GV for its true SUV design.

About Subaru interiors: A lot of people here and elsewhere criticize them and call them low-quality or dated. As a long time owner of Subarus, I wanted to set something straight about Subaru interiors: They are not the most modern nor stylish, but they are high-quality and durable. The interior of my 1995 Impreza was better built than most comparable cars of that era and very few things broke in the 200,000+ miles that car took on. The 2002 Legacy I had for a while that my brother now drives has an austere interior, but it's durable and everything works. My brother is a slob and doesn't clean nor care about his car. Yet, nothing is broken.

In comparison, nearly every single Mark IV Jetta I've been in has broken interior pieces. My father's 2004 Jetta is a prime example. The plastics of the center column are scratched or broken. The headliner is peeling. The glove box is broken. The center console is broken (every single Mk. IV Jetta seems to have a broken center console if it's over 5 years old). These aren't even all the issues with the interior as the list goes on. Yet, most people and even critics praise VW's interior designs and "quality" and lambast Subaru's. In essence, they are judging the interior by aesthetics and not by actual durability or material quality, especially how it holds up over time.

So while Subaru interiors may not look most appealing, the actual quality of Subaru interiors are top-notch by my experience and I've put well over 100,000 miles on Subarus. Maybe the GV's interior is the same. However, that design is from 2006 and no one else was using a design from the mid-2000's in a 2013 model. Seven years is way too long for a design and Suzuki's sales became a victim of this issue.
2011 Suzuki Kizashi Sport GTS 6MT (Black)

#45784  by Woodie
Wed Nov 22, 2017 12:07 pm
This passes me by completely. When someone says something looks dated it registers nothing whatsoever. I want all the buttons and switches to be in reasonable locations and work well, couldn't possibly care less about style.

Agreed about the Jetta. I had a Jetta rental when my Kizashi got crunched a couple of years ago. It had 17K miles on it and the interior was all busted to hell.
Alcohol, Tobacco, and Firearms
Should be a convenience store, not a government agency